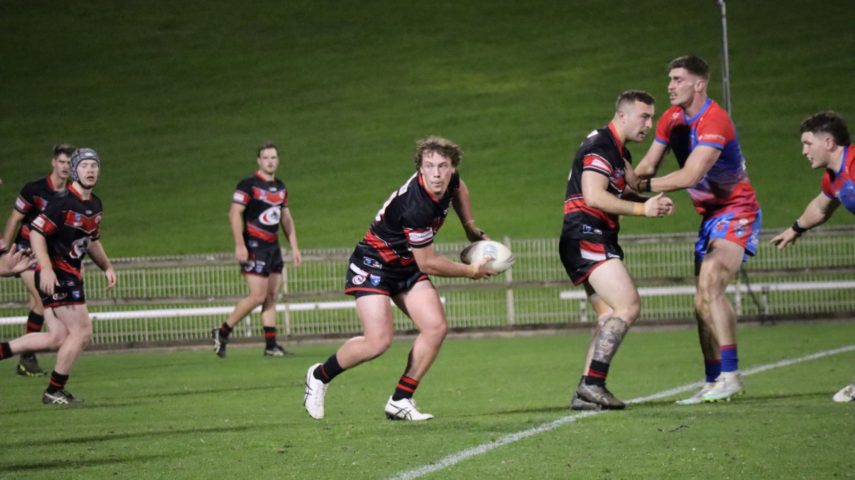 Call it statement made. They certainly don’t come more emphatic than Collegians’ 46-16 dismantling of Wests in the feature bout of the Mojo Homes Illawarra Cup magic round on Saturday.

Both league heavyweights were tipped to enjoy their first outing on a fast track at WIN Stadium and the Devils took to it quickly as they led 12-0 after just six minutes.

Having been caught on the hop, the Dogs responded with four unanswered tries to lead 24-12 at the break.

It was a rampage from there, Nathan Fien’s side crossing 11 minutes into the second stanza and running in another three four-pointers before Wests finally hit back in the 78th minute.

It was one of the finest regular-season efforts in Fien’s time in charge, and set a new benchmark in the 2022 premiership.

“I said to the boys that was one of the most complete performances from any Collies team I’ve been involved with,” Fien said.

“Like everyone we’ve been trying to get a bit of flow into the season with the wet weather and we circled a couple of games at the start of the year.

“Thirroul [two weeks ago] was one and unfortunately that turned into a bit of a quagmire and a bit of a non-event.

“We just wanted to see where we were at. We got an opportunity at WIN Stadium and the boys really lifted for the occasion.

“It didn’t go to plan to start with but the way we were able to put the brakes on the momentum that was like a runaway train going in the opposite direction was really good.

“From my point of view [Wests] have probably been the benchmark so far this early part of the season so to be able to do that to a team on a roll and play some good footy ourselves is very pleasing.”

The 30-point defeat was the biggest loss of coach Pete McLeod’s hugely successful tenure and will leave the Devils with some soul-searching to do ahead of this Saturday’s showdown with Thirroul.

While their woes were primarily defensive, there’s no doubt the loss of halfback and key man Justin Rodrigues to a significant head knock in the 18th minute was telling.

It came with the scores locked at 12 apiece, but the Devils never looked like winning from there, with the blow likely to leave Rodrigues in doubt for the clash with the Butchers.

Rodrigues’ absence further highlighted a masterful play-making display from Collies No. 7 Zeik Foster, who turned in his best performance in a Dogs jumper.

“Last week we started to see a bit of that come into Zeik’s game and he’s just starting to look comfortable in that role,” Fien said.

“He’s been with us a couple of years now but he’s also been in town (Dragons NSW Cup). Trying get those combinations going when you’re not at every session makes it hard.

“He’s definitely settling into that role and he was definitely one of our best. You look across the park, there wasn’t a bad player tonight.

“It was one of those game where everything just clicked. It gives us a bit of a launching pad into the back end of the season but you don’t get a trophy tonight.

“We know where we’re at now in terms of what we can do and it’s up to the boys now to get back to work and excited about what’s ahead.”

The Dogs left edge proved the most potent, with Sam McCann finishing with a double, but the reigning premiers had their work cut out early.

Devils fullback Lachlan Hurst went 80 metres on his first kick return after sneaking past Kome Uili on the eastern flank.

Levi Pascoe split the Dogs through the middle for the second try minutes later but it was all one way traffic from there. Ben Rumble grabbed his first try 11 minutes into the second stanza and then snaffled an intercept to put McCann away for his second that snuffed out the Devils resistance.

Ryan Hodgson and Alec Reid also got across before it was done, with Callum Waldock grabbing a late consolation for the Devils with a minute left.

In other matches, Helensburgh and De La Salle turned on a belter in the second match of the day, a Wyndham Peachey try sealing a 28-14 win for the newcomers in a match poised on a knife edge at 16-14 heading into the final 10 minutes.

Dapto notched their first win of the year 42-32 over Corrimal in a high-scoring affair, while Thirroul barely got out of first gear to run in 11 tries in a 50-0 win over Cronulla Caringbah.