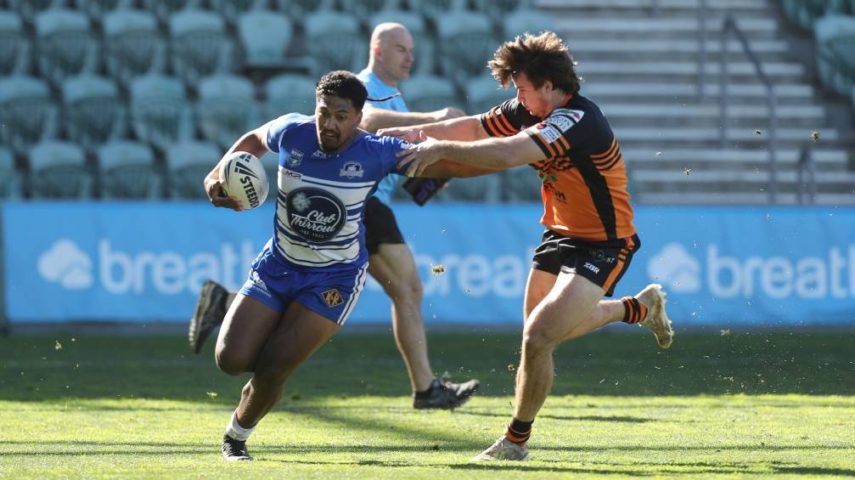 Despite sitting comfortably in the top four for most of the season, Luke Manahan’s side was yet to manage a victory over a major top-four rival having been edged out in previous encounters with Thirroul and Wests.

The hosts led 16-12 at halftime in a game that finished three tries apiece, three penalty goals to Chaz Jarvis and a late field goal to Jake Hay for a seven-point buffer sealing the deal. It came after both sides were reduced to 12 men, with Alec Reid (Collies) and Salesi Ataata (De La) both binned for separate incidents midway through the second half.

It was a second straight loss for Collies, who drop to fourth on the ladder, with De La Salle now a rung above. Manahan said claiming a first major scalp is a valuable confidence-builder with finals footy just a month off.

“It was a good performance from us,” Manahan said. “We played a bit of footy. We weren’t too worried about the track, we just went out and played our game which was really good. We just said we wanted to play from the get-go and make a mark on the game.

“The biggest thing for us was Collies are known for their pack and how big and mature they are in this competition. For our young pack to come out and really muscle up was really good. They struggled to get out of their half and we created a lot of momentum and the energy was there for us.

“We’ve been close [to a win] with Wests and Thirroul and just haven’t got it done. To knock Collies off and really match it with their pack, it’s a good proving point for us now that we’ve knocked off one of the big three.

“We’ve got a tough run in but we’re pretty confident we can do it again. It builds a lot of confidence for us just knowing we can get that win.”

It sets up a massive clash with Thirroul at Gibson Park this coming weekend ahead of showdowns with Helensburgh and Wests to round out the regular season. What had looked like a torturous run home now shapes as the ideal finals preparation, with a top-two spot, and all important two bites at the final cherry, well within reach.

“After beating Collies there’s the confidence we can win it, but finals is the goal and we’re aiming for that top two spot,” Manahan said.

“Then anything can happen, anything goes in finals. It’s been a bit of an up and down season with the weather and what not, but coming into the finals, we’ll have tough games going in. There’s not one game leading into the finals that’s going to be light.

“I’ve said Thirroul’s the benchmark from the get-go. They’re the form team and I think that game we played against them at Shark Park [in round five] was probably the highest quality game of football I’ve watched in the competition all season.

“We’ve played all teams so far and they’re the cream of the crop. They’re in some good form and they’ll be tough to beat at home, but we go in with a bit of confidence as well so it should be a good game.”

Thirroul will head into the clash on top of the ladder after grinding out a tough 14-12 win over a game Helensburgh at WIN Stadium on Sunday. Leading 10-6 at halftime on the back of tries to Monty Raper and Riley Graham, the Butchers trailed 12-10 following second-half tries to Tigers pair Adam and Max Batty.

The Butchers ultimately got home via two penalty goals from Tarje Whitford, the second with just seven minutes remaining. Jarrod Costello’s side was good enough to hold on but have some concerns heading into the clash with De La after Damien Sironen (knee) and Steve Marsters (ankle) failed to finish the match.

“It wasn’t a polished performance but it was really gutsy,” Costello said.

“Helensburgh really came to play, they had a lot to play for and we had to work really hard for that. We had a few injuries coming into the game and a couple we picked up during the game but the guys really hung in there well and got it in the end.

“Fingers crossed we get a couple back next week and we just need to dust ourselves off and get ready for De La. It’ll be a huge game. They were excellent when we played them up there in round five and they’re a really good footy team.

“I knew they had some guys out in the loss they had to Wests so [their win over Collegians] didn’t surprise me and we’re really looking forward to next week. Fingers crossed the suns stays out and we can get it on at Gibbo.”

It was a bitter pill for the Burgh to swallow, scoring three tries to two but still coming up with a loss that all but ended their finals push.

“We’ve asked for 80 minutes all year and we got it today,” coach Jason Raper said.

“We know we’re built on being tough and being resilient… I’m so proud of the guys. They didn’t deserve to go down like that. They played their backsides off and I’m disappointed, but I’m proud.

“There’s a lot of belief in this group, we just need to put it together. We did it today but credit to Thirroul, they kick long, chase hard and do all those little things they’ve been doing forever.

“They got there in the end, but I know we’ve got the group to shake this [finals race] up so hopefully we can.”

Also on Sunday, Wests were too classy in a 42-6 win over Dapto, while Cronulla Caringbah all but resigned Corrimal to a wooden spoon season with a 24-10 victory.